“An important story” and “an inspiration” for the Congressional investigation into the big tech platforms. – House Antitrust Subcommittee Chairman David Cicilline

“One of the year’s best books on how to rethink capitalism and improve the economy.” – Business Insider

“The kind of big economic history that the moment needs.” – Chris Hughes, co-founder of Facebook and cochairman of the Economic Security Project

“Full of righteous and riveting writing, “Goliath” provides an important overview of a vital history.” The Washington Post

“Though anti-monopolism has been dormant for decades, the corporate consolidation of this century has given Americans on both sides of the political spectrum reason to wonder if it should be awakened. And Stoller’s treatise is a good place to start in thinking through that question.” Kyle Sammin, National Review

“A remarkable and fun story about corporate power in America. Stoller brings to life pivotal political fights over banks and monopolies, fights that took place in boardrooms, in hearing rooms, and in mass protests. Highly recommended.” – former Congressman Henry Waxman 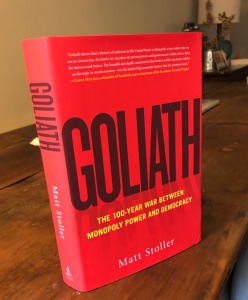 “Goliath, Matt Stoller’s book on the rise of monopoly power is one of the most important books of the year. Full of fascinating unknown characters & history.” – Jesse Eisinger, Senior Reporter and Editor at ProPublica and author of The Chickenshit Club

“An engaging call to arms at a time when corporate power is increasing and that of the middle class evaporating.” – Kirkus

“Goliath is a meticulously researched, powerfully argued and beautifully written book. Every thinking American must read it.” – The Washington Book Review

“Chapter nine, “The Free Market Study Project,” is must reading for all think-tank presidents and fundraisers. It’s an account of how a group of conservatives changed the course of economic history.” – Reagan FTC Chair Daniel Oliver

The Rise and Fall of Andrew Mellon, The American Prospect

How the Democrats Became the Party of Monopoly and Corruption, Vice

How the “Watergate Babies” Released the Beast of Monopoly Upon America, ProMarket, the University of Chicago Booth School of Business Stigler Center Blog

How Reagan, Clinton, and Bill Gates paved the way for the rise of Big Tech, Fast Company

Monopoly and Its Discontents, Gerald Berk in The American Prospect

A history of America’s fight against monopolies, Benjamin Waterhouse in The Washington Post

Corporatism Is An American, Bipartisan Scourge, Saagar Enjeti in The American Conservative

Antitrust and the Candlestick Makers, Daniel Oliver, The American Spectator (Oliver was Reagan’s FTC Chairman and had a strong emotional reaction to this account of his work.)

Small vs. big – not blue vs. red – is the great battle of the next American century, Ross Baird in Impact Alpha

Matt Stoller on the War Between Monopoly and Democracy, Corporate Crime Reporter

Amid a Revival of Anti-Monopoly Sentiment, a New Book Traces Its History, National Review, Kyle Sammin

How to Break Up Corporate Giants by Robin Kaiser-Schatzlein, The New Republic

It’s Not Enough to Be Against “the Monopolies” by Nicole M. Aschoff, Jacobin

Big Business Is Not the Enemy of the People, Rob Atkinson, National Review

Just like the “Money Trust” before it, Wall Street is a threat to democracy, Carter Dougherty, Take on Wall Street (Coalition of labor and consumer groups)

No Going Back, Gabriel Winant in The Nation

If you’ve written a review and it’s not listed, let me know by sending me an email at stoller at gmail.com.